The sentence that accompanies the visitor through a richly patterned door into the Seydou Keïta exhibition was the Malian photographer’s proclaimed tagline, one he perhaps repeated to countless subjects that posed for him from the 1940s onwards in his studio in Bamako, in the space of a few decades in which his work extended to neighboring countries and achieved worldwide recognition. Many photographers distinguish themselves through the diversity or eclecticism of their subject-matter, from portraiture to genre and landscape; Keïta was not one of them, focusing solely on portrait photography of a seemingly formal nature. Yet, it is through this uniformity and simplicity that Keïta acheived some of the most complex, sensitive and multi-layered portraits of the 20th century. The formal premise is that of his photography business: subjects drop in to have their photograph taken either within his studio or outside, due to his constant preference for natural light. The backdrops are usually  patterned cloths, changing over the years, which become Keïta’s only means of placing a date on them. Entering the exhibition space is to enter an airy, vast space of soft pinks, whites and reds which delicately complement the black and white pictures, blown up almost life-sized, as though to transport us back to the precise moment in which Keïta achieved his perfect vision for the shot. Notoriously meticulous about poses and gestures, the results he achieves are not spontaneous or candid yet they capture the subject with startling intimacy and sincerity.

The effect is both striking and contemplative, in rooms that allow enough space for the photographs to breathe, but also convey enough intimacy for these anonymous faces to speak out to us. Anonymous, because Keïta’s way of working (footage shows people queuing up to be photographed one after the other) does not leave room for official records and names. We are left to guess thoughts and relations from one subject to another. As fashions change and intermingle, between Malian fashion and European suits and skirts, a portrait of a country in the midst of change and shifting identity, between images of tradition and modernity, is etched but never quite grasped. At the time, Bamako was still the capital of French Sudan; the year 1962 marking the independence of the Sudanese republic marked the closing of Keïta’s studio, as he was asked to become the first official photographer of the Republic of Mali.

Moving through the space, the sense of continuity and familiarity between different photos is through not only textile backdrops, but another theatre-like feature: props. Sunglasses, handbags and even an elegant white Vespa pop up in different pictures, as ways for subjects to play creatively with the composition, and also, significantly, the way in which they wanted to be seen and represented. Keïta’s portraits are sincerely realist, yet they also belong to the realm of fantasy and aspirations, on the public status level of a busy neighborhood of Bamako where photographs were usually taken in front of a noisy crowd of peers, and on a deeply personal level. 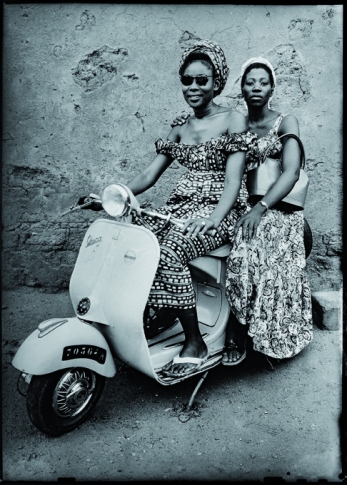 The final room of the exhibition brings us back to the small-scale level of the photographs that would have been taken home by subjects; since Keïta did not keep his own copies of the photographs, most of them were found abandoned or forgotten by clients of the framer’s shop, who also took care of colouring certain accessories. The contrast with the impeccable large-scale portraits is stark; many of them are torn, yellowed or stained. Yet, a deeper sense is given of them as artifacts and keepsakes, fragments of family memories and personalities. They mingle with the confident and light-hearted words of Keïta himself, through footage of his work and interviews that draw smiles and laughs from visitors. The photographer’s pride in his work and confidence in its perfect execution is communicated through his warmth and charisma. One of the quotes peppered throughout the exhibition states proudly and poignantly:  “You can’t imagine what it was like for me the first time I saw prints of my negatives in large-scale, no spots, clean and perfect. I knew then that my work was really, really good. The people in my photos look so alive, almost as if they were standing in front of me.” This heartfelt exhibition left me with no reason to disagree with him.