Visiting a museum or gallery can be a silent and solitary moment, despite the people surrounding us. More than once I feel that I am missing out on a great deal of discussion in front of a work of art with fellow visitors but no opportunity is given to me in order to change that.

Yet this notion is being challenged by a new generation of gallery-goers. Previously on this blog, Les Jeudis Arty were opening up art galleries to a larger Parisian audience. This time TalkAbout Guides, an Oxford-based company, are sparking off lively conversations in museums.

Eliza Easton, Communications Director for Talk About Guides, tells me all about the frustration of quiet art galleries, asking the right questions, and why overzealous shushing in museums alienates us all.

What is the general concept of TalkAbout?
Eliza Easton: So the idea came from the fact that there was a group of us that were really frustrated with the way people were approaching art galleries that we worked in, and that people in contemplation thought of as appropriate. It was almost like a library, where you were only allowed to think about the works themselves…whereas I think that as a student the really enjoyable part about my course was having conversations about the artwork that can even be quite frivolous at times, and feeling really comfortable doing that. So that was why we started doing that. And the way we approached tackling that problem was to create kind of conversation-starting questions. So there’s a whole range of questions on different themes. And those questions invite conversations, specifically conversations that encourage you to look at the artwork closer but also encourage you to talk more to the person that you’re with. Because you remember things far better if you actually have someone to remember them with you, it’s really basic psychology. We felt that this was a problem that we tackled. 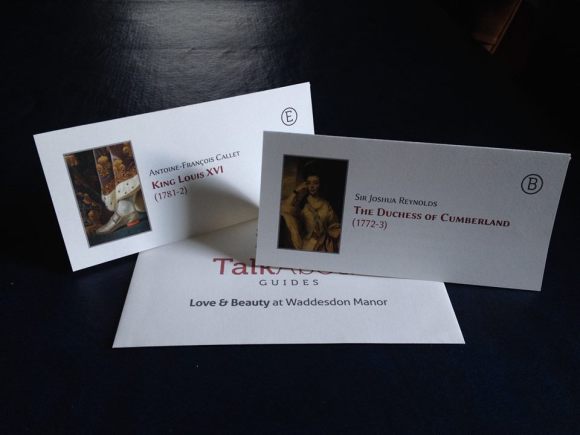 What does the project look like, how is it used by the visitor?
E: The form that it takes at the moment is a set of five cards, each with three questions. They are fold-out cards so the questions are sort of revealed to you on an individual theme, a theme like love or beauty, or death, or fantasy… Sometimes they are themes around a specific event: we are doing one for the Breath Festival, which is themed around breath, different types of ideas to do with being alive. They come in an envelope, you can take them out, you can also keep them to have a physical reminder of the discussion. You give them to friends, to invite them to have this journey with you, or take the same journey with a different person… 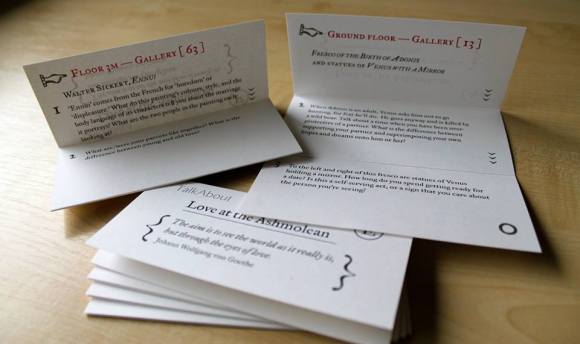 How are the themes chosen out of a wide range of subjects? Is it something that’s more of your personal preference, or is it based on feedback?
E: It completely depends on the project we’re working on. Sometimes they are separate projects, like I mentioned with the Breath Festival, working out how to present the subject of breath. Obviously we work in the galleries themselves. For example we’re doing a project at the Ashmolean at the moment on Schubert and Goethe, and we’re doing different themes within one pack based around that. The questions can be varied anyway, even within their theme. And then for another project at Waddesdon Manor where we had three themes…we actually went round, had a look, then had a meeting with some of the curators who were interested, kind of bounced ideas off them, suggested three final themes and they accepted them. If they had thought of different themes we would bounce that round a bit more. It’s similar with the objects: we go round, choose the objects, and communicate our choices to the curators. Whether they say yes to all of them, or yes to one of them, we work from that point onwards.

So really, it’s a tailored, custom-made theme for every single institution…which could take quite a lot of time I imagine. What’s the time lapse between the moment where you start collaborating with the institution and the final actual product that can be used by visitors?
E: It’s a really funny thing because first of all it’s quite a long time just because of the way that museums work! So they have to budget for things a long time in advance. So we can only take it as fast as they can take it. So they’ll decide they’re going to do it but they might not OK the objects for another two months…and so, you have it on the boil but it’s not taking up much time. The thing that does take us a long time is working out the questions. It’s a little bit design-dependant as well so if the museum wants their own design for the card, then obviously you have to work with the designer. The Ashmolean uses their own designer to help us, so it’s hard to find but they help us orchestrate it. For each question, each set of five questions between about five thinkers, question-seekers, it probably takes…four sessions, so probably eight hours for five cards. Five cards, each with three questions…fifteen questions in eight hours.

So it also takes quite a lot of time back and forth, checking that everybody in the team is okay with the questions?
E: Yes! It’s actually quite difficult to think up questions that are meant for a conversation. There are so many questions that have a yes or no answer and that people can laugh off but we choose questions that make sure people will start talking. The other thing is, we always drive ourselves in a bit of a passionate state because we’re so interested in the questions, they’re great philosophical, aesthetic or intellectual questions…It’s interesting because we’re going start bringing in other people to work on specific projects, it’ll be exciting. So at the moment we’re working on a training program to help people learn how to answer the questions. We’re looking for a kind of consultancy situation where we will have a pool of people who each have different specialties. For example, say, if you knew a lot about history of art and you knew specifically about a subject for a project then could we go to our list and look at it to select you. If we’re working on a project involving Schubert and we have somebody who knows a lot about music it’s useful to have them on board. So that’s how we can improve it a little bit at a time, because having a basic knowledge can help for a lot of things but people having selective, focused specialties on certain subjects can make everything more coherent. We also have something called a question bank, which is a big list of really interesting questions that we think up in our daily lives and that we want to get them to be talked about more at some point but we’re are still waiting on it.

Do you think there is a definite problem of museums and cultural institutions intimidating people into silence?
E: I think it has more to do with the democratization of museums. I think that when it was all just the upper classes visiting, everyone felt comfortable because they all had training…Now everyone visits them which is such a positive thing but there’s still a problem especially in the UK where you don’t learn about art and you just don’t talk about it. So of course it’s going to be alienating. In Waddesdon Manor where I worked, you could see little schoolkids walking through and their teachers would go “Shh! Shh!” shushing them into silence, because they’re pointing out, going “What’s that?!”…but I think that’s exactly what most curators want! Especially since it’s a house meant to be visited, interacted with.

My mum is a teacher and she was showing her schoolchildren through the Musée d’Orsay…where they kept being shushed by the guard! It’s stupid because these places attract a lot of people and yet they don’t want them to interact fully with the works…
E: Yes, it’s not a straightforward dialogue. It should be a conversation…that is what’s really puzzling for me. A silent art gallery is great but it should also be a place for conversation. Otherwise it’s so intimidating! It’s like being in a library…which is nice on one hand, art is also meant to be appreciated when you’re alone, but…it should be something more.

It’s kind of like John Berger in Ways of Seeing comparing people’s visions of museums to churches.
E: Yeah but even in churches, people sing, you know? There’s something communal about it whereas in art galleries everyone walks off on their own.

Yes it’s true. Especially with audioguides…What do you think about audioguides in general as a way to engage with the art?
E: Basically I think that audioguides can be a really good thing but they can also be intensely alienating and going into the room with people listening to audioguides and being the only one without them is always weird. I think also that the Internet made it so easy to find out facts… if you’re interested in a piece and you want to go home and find out facts about it, become more knowledgeable about it, that’s easy to do. You just need to be able to remember the piece in the first place. And if you’re not doing that, if you’re just accumulating facts, facts, facts and you’re not enjoying yourself, and not really sure which direction you’re going in…it’s not that great. About audioguides, it’s a weird thing that they are so normal. Maybe there should be a way of making use of what you already know to fill in blanks rather than cutting people off from each other.

How would you picture TalkAbout evolving, about one year from now? What direction do you think it’s going to go towards?
E: I think it all depends…The team is completely brilliant, which means they’re up for doing a lot of things all the time, so it’s a bit tough to determine exactly what we are going to do but we’re definitely going to open it up more, it would be really exciting. We’re hopefully going to be in cultural institutions the US and the UK…and I think working in London museums would be good, after Oxford, and lots of other national properties are interested. If we could also get more students on board we can work on more projects as a company. At the moment we are working on three projects each, with individual questions for different museums, and that’s pretty heavy for us.

Remind me who TalkAbout has worked for?
E: The Ashmolean in Oxford, twice, Waddesdon Manor, and then we’re working for the Breath Festival which is at the Pitt Rivers and the Natural History Museum in Oxford, working at the Oxford Castle which is going to be a permanent…and our future projects aren’t yet ready for full disclosure!

“When was the last time you had an interesting conversation in a museum?” Talk About asks, and so do I! If you have any interesting, good, bad or downright awkward conversations in museums, I definitely want to hear about them!

Ways of Seeing by Jonh Berger is a BBC documentary from the 1970s that looks at the way in which we perceive art and visit museums now, with the arrival of photography and mass media. Find it here.

Independant curator and art historian. I did my BA Art History at Oxford University and my MA in Curating at the Courtauld. Now based in Paris, I write about art, undertake independant research and curate contemporary art exhibitions and projects.